As mentioned before, we are not interested to keep our engine running on Diesel fuel or any alternative. This brings the need, that we have to modify the basic engine design from a combustion ignited engine to a spark ignited engine. Basically you are just replacing the Diesel injectors by spark plugs, feed the engine fuel (methanol in our case) with the intake air and you are done … well, no 😉

An internal combustion engine needs a certain amount of energy to ignite the air/fuel mixture in the combustion chamber. In a compression ignition engine (Diesel) the air in the cylinder is compressed during the compression cycle, and following the first law of thermodynamics, the reduction of volume results in an increase of pressure and temperature. The temperature is high enough, so that the fuel auto-ignites when injected. The moment of ignition is given trough the injection pump, theoretically just in the moment, when the piston passes the top death center (TDC).

A spark ignited engine usually has it´s fuel directly in the intake air and the compressed mixture is ignited by the energy released trough a sparkplug, when the piston passes TDC.

Compressing an air and fuel mixture by the same amount as in a Diesel engine will result in an uncontrollable ignition of the mixture long before the piston reaches TDC.

Options 5 and 6 are impractical, because they will both result in a reduced overall displacement, and option 5 weakens the connection rod pin, not talking about the cost.

Option 1 is common when turbo- or supercharging gasoline automotive engines. No real option for us with individual cylinder heads, and the additional need for longer cylinder head bolts.

Option 2 is also impractical, because the pistons will hit the crankshaft before the bottom death center of the stroke.

Option 4 wouldn’t work due to the cylinder head design, and the need to remove the volume of a full cup of coffee … per cylinder 😉

Time to find out how much material we can remove on the pistons, without weakening them to much.

That should be enough. Now, how can one determine the volume you remove, without 3D scanning and CNC machining? Interpreting and adapting the principle of an old Greek guy named Archimedes solved our problem. Time for a lot of aluminum chips 😀

Modifying the cylinder heads to mount spark plugs was a piece of cake. Drill out the injector hole, tap and your done. Well, this time it was actually that easy. A little bit of flattening the bore for spark plug sealing, but that was it. 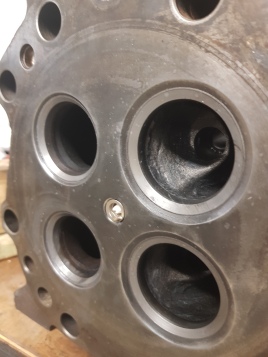 Some people will now say: “Yeah, right, but this is not it!” … and they are right. Maybe we will talk about mechanical compression vs. overall compression, volumetric efficiency and some further “small” details on alcohol fed turbo- and supercharged engines in a future episode 😉