After the engines made their way into the workshop, they weren’t really handy to move around to free up space and get some other work done. Time to remove the gearboxes and get the engines on some kind of a fixture. The first gearbox gave us a hard time, but we were able to convince it.

Each further step made the engines become smaller and mainly lighter. We didn’t weight them without the gearboxes, but they certainly come in around 1200kg. 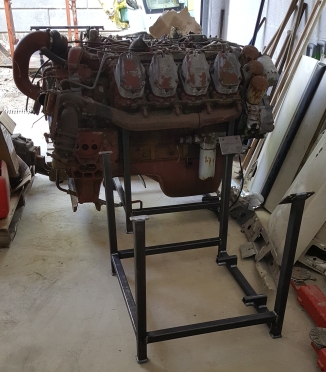 We were finally able to move them easily around and proceed with the tear down. Diesel injection pumps (we will certainly not need these), auxiliary drive, power steering pump, oil cooler, water pump, lots of oil filters, engine supports, … the list just keeps going on with stuff we don´t need for pulling.

Time for a look inside … cylinder heads of … damn, the first engine is not as good as we expected. Somehow we cannot trace back, why we started tearing down this engine first. The plan was to prepare one engine and keep the other one in stock as spare. The crankshaft wouldn’t move and we found the reason. Somehow water or moisture made it into half the cylinders and the pistons are stuck due to corrosion of the piston rings to the cylinder sleeves 😦 We would have fun with the further tear down.

At least we can give some impression on the cylinder bore … you can put a 0,5 liter can or bottle of beer in one of your cylinders … how cute 😛 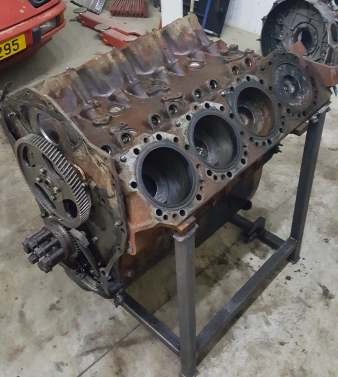 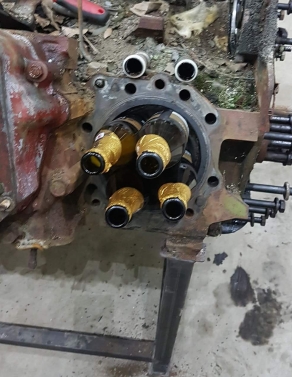 Time for an engine stand … the engine manual comes with nice illustrations of the original maintenance stands for the engine. Unusual to flip an engine along the transverse axis, but the Italians have apparently well thought trough this solution, because it works very well.

Time to get the crankshaft unstuck. Every bolt in relation with the crank impresses on one side by its size, but mostly by the engineering effort which seems to have gone into each one of them. With the main caps of, still no movement in the crankshaft and you can just reach part of the rod bolts …

I will not describe or comment the hours that followed, before the crank and all 8 pistons with rods were out, but it involved a lot of WD40 (and similar) juicy juice and tingling with a sledgehammer. Most important: nobody was hurt and the patient is still alive 😀 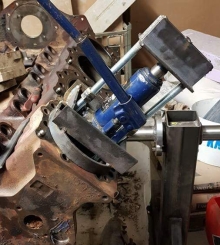 … and we need 4 spare sleeves … time to tear the second engine apart. Astonishingly this engine rotated freely and the disassembly went completely smooth. As I told, we can not trace back, why we chose to use the bad engine in first place